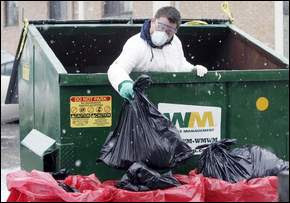 One of the many hallmarks of the pro-abortion movement is the slogan, "safe, legal and rare."

How that perceived notion fits in with the local police and the state Department of Environmental Quality raiding your trash dumpster and hauling away its contents is yet to be determined.

Dr. Alberto Hodari is a late term abortionist who owns six abortion clinics in Michigan. He has been previously accused of killing two girls from abortion and in a talk to medical students at Wayne State University said that he had a license to lie to his patients.

Concerned pro-lifers in Michigan began checking the contents of his trash after rumors of Dr. Hodari raping sedated patients began to float around. After a few weeks of checking the dumpster on a regular basis, they notified the police who just this morning carried out the raid.

While the newspaper reported in a gentle tone that "medical waste" was found in the dumpster, the people who went through the trash found things that can only turn your stomach. Below are excerpts from a report made for the police:

"Milissa and I began investigating the dumpster behind the Womancare facility Friday, February 8, 2008.

What we found that Friday were patient records and open condom wrappers.

By looking through these documents we learned patients' names, phone numbers, addresses, ages, how long their pregnancy had lasted, what they were being seen by the doctor for, insurance forms, methods of payment, and several lab reports. We also discovered in the trash used syringes, ultrasound pictures of the babies, dozens of used drug vials, several used IV bags with the sharps still attached, bloody absorbent paper, open condom wrappers, used condoms, and bloody used laminaria.

On our third trash investigation we also found bloody canulas and human tissue distinguishably not a baby, except this time we also discovered infant body parts, including arms, hands, legs, feet, a spine, a ribcage, and eyes.

We estimate we found at least ten different infants. Each one was wrapped in a bloody gauze, tied at the end. Once you turned these inside out, you would find the infant parts. Each bloody gauze that was filled with an infant was wrapped in the absorbent paper used to cover the operating table which was soaked in blood, and used, bloody, latex gloves."

The police indicated they may not be able to pursue criminal charges on Dr. Hodari, but surely everyone can see this should not be tolerated in our society. Right?

Our friend Jill has more.

(Photo of man in Hodari dumpster from the Detroit News)

JacqueFromTexas said...
I'm grateful that rescuers still do this. May God grant them the stomach for it, and may the need cease soon.
Mon Mar 10, 05:10:00 PM CDT