12/13/2007
Which one should we kill, Ms. Curry?
Dateline MSNBC ran a show Wednesday night talking about the 10th anniversary of the world's only septuplets (7 children born at once.) Dateline has been following the McCaughey family and the parents Bobbi and Kenny since the children were born and how they have been doing all these years.

The story is mostly positive, upbeat and fast-moving as they focus on each child and what their interests are etc..

Two of the seven children were born with cerebral palsy and have had some struggles in learning how to walk correctly. They struggled in a particular way with daughter Alexis, however, both children are on the road to walking independently and seemed to be doing rather well displaying that enthusiasm for life that children have.

Then the reporter, Ann Curry, drops this bomb on the parents:

Ann Curry: Knowing now where Alexis is, do you feel any regret about your decision to carry all seven babies?

Bobbi: How could I? Look at Alexis. There's not a person in this world who loves being alive more than she does. How could I feel sorry that I had all of my children?

Kenny: The answer will be the same from now until 100 years. We don't regret it at all.

I give kudos to Bobbi and Kenny for not reaching out and strangling Ms. Curry for asking one of the most insensitive questions you could possibly ask somebody.

Her question does not reflect the reality of the situation that the McCaugheys find themselves in, after all they met at Bible college, are devout Baptists and believe in the sanctity of life.

Her question instead reflects the inability of the media to come to grips with the fact that this family long ago decided that the only solution to having so many children was not abortion, but that they should instead give themselves away to them.

Her question makes no sense otherwise. In a world that only sees the hardship and struggle with raising children and the difficulty that can bring, the McCaughey situation seems impossible, and so there is a tendency to see them as a "show" that needs to be promoted and talked about, because it is so different from her own worldview.

Ms. Curry cannot possibly understand how they could go through all of this, especially with disabled children, and not regret having some of them "selectively terminated," a phrase she used in the interview.

It's really sick, but the abortion mentality is strong and weighs heavily on the minds of those who are uncomfortable with the proud witness of a life devoted unselfishly to the care of others. 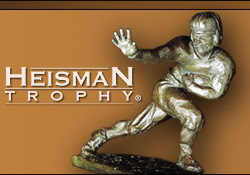 Tim Tebow, the quarterback for the University of Florida Gators football team is the first sophomore in history to win the coveted Heisman Trophy Award.

The Heisman Trophy is given to the most outstanding college football player for the year.

Tebow's impressive record for a sophomore includes many other awards other than the Heisman and it's probably safe to say that Gators fans are extremely proud of this young mans achievements.

But it's good thing his mother was a Christian who did not believe in abortion, otherwise Darren McFadden of the Arkansas Razorbacks would have been the winner, having been this year's runner-up.

Tim's mother was advised to have an abortion when she was pregnant with Tim because the doctors determined that because of her medical treatments from dysentery the child in her womb would be "irreversibly damaged."

Thank God she did not listen to her doctors.

It makes you wonder though. How many other people who were "irreversibly damaged" have been aborted and what would they have accomplished?
Written at 1:05 PM by Andrew Smith.
0 comments
12/05/2007
Ignorance, Inc. 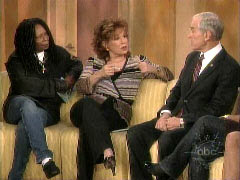 "The View" is one of those TV programs that is a great barometer of the culture. The people they get to host this show are usually very ignorant of the issues discussed and rely more on ad hominum attacks and emotion-filled appeals rather than logic.

But sometimes the amount of ignorance is astonishing. Yesterday, Republican Presidential candidate Ron Paul appeared on the show and was grilled by hosts Whoopi Goldberg and Joy Behar about his beliefs on abortion.

You can read through the transcript of their discussion and see that in the end both Whoopi and Joy really don't know where they stand on abortion. When Mr. Paul asked them if they were OK with aborting an 8 month old baby they both said they were not but Whoopi insisted that this was not even possible. Mr. Paul trys to tell them that Roe allowed for abortion through all 9 months but they are not listening.

Even more astounding is this line from Whoopi:

GOLDBERG: Well, that’s, that’s the idea. But here’s my question: If you make a decision that this is where you need to go, because I said to somebody else earlier on this show, no one makes this decision lightly. This is not someone somebody says "oh I think I’ll go get this." This is not a fun thing to go do. So someone has come to that place to make that decision is because it really needs to be there. Now, I think you should be able to get some help if you’re reaching out for somebody like that. What bothers me is that there is no one who says "here’s what we can do" because, you know, we have all of these children. What are we going to do with them? If everybody has the kids. Nobody, the churches don’t want to take them. Nobody wants to put them in the thing- no I want to finish the thing, period.

It's hard to tell exactly what she is talking about but the notion that nobody wants them or that the churches won't help is simply not true and is more indicative of the culture she is surrounded by rather than the reality about the kinds of help that is available for women who are pregnant and in need.

Ultimately it's not important for The View to get the record straight. We don't expect them to. But if you ever wanted to do a study of rotten American culture and how ignorant people are, The View is a great place to start.

Written at 8:36 AM by Andrew Smith.
1 comments
12/03/2007
Abortion: The Balance of Life
At a recent talk given by our Youth for Life presentation team at a local church, one of the students filled out the student evaluation form in this way:

Comments: it was kind of like a desperate recruitment to me. i think abortion is part of the balance of life and if God didn't want it then there wouldn't be such thing as abortion.

Who taught this student to think and moralize in this way?

Of interest is another evaluation form that was submitted by another student at the very same talk:

What part of the presentation, if any, was confusing to you: how courts could listen to a woman who wasn't stable (drugs/alcohol) and give a doctor permission to do something that only God should do.

Written at 3:20 PM by Andrew Smith.
1 comments
Abort my child; Raise a tree
One of the more insane articles to make its way to the surface is this one from the London Daily Mail about a woman who aborted her child and sterilized herself to save the environment. 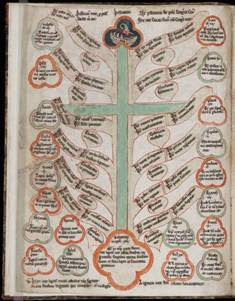 She thinks having children is "selfish" and that "it's all about maintaining your genetic line at the expense of the planet."

In today's Dallas Morning News Kathleen Parker responds to this notion with appropriate humor and sarcasm and notes that "raising children is quantifiably the most persistently unselfish act known to mankind, as millions of veterans of sleepless nights will attest. "

As a new father myself, I have to say that I agree with Ms. Parker and find the reasoning of those who would rather raise a tree than a child scary. It's one thing to be pro-abortion and support the killing of innocent children. It's quite another to think that the human race is only good for wrecking the planet and therefore should not exist.

But this is the natural evolution of the arguments supporting abortion.