Before working for the CPLC, I didn’t know anything about when a baby is scientifically forming. And that was fine because nothing in my previous job would have been affected by me knowing or not knowing when a baby is formed in the womb.

But this woman is supposedly a trained professional in her field. She’s giving information that people are going to use to make life and death decisions with, literally. What kind of training are these people getting? This is something she should have known or researched. 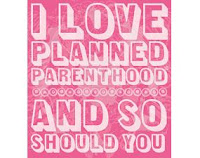 I want to give this woman the benefit of the doubt. Let’s say she’s a caring compassionate individual who really thinks she’s doing the right thing by helping these ladies kill their unborn babies, hide it from their parents and give them lots of birth control pills so that they will be physically liberated to have a happy life of premarital sex and future abortions.

That might sound good in la-la bizarro land, and that female employee might feel good at the end of her day that she helped a poor little girl out of a "terrible" situation, but that woman doesn’t have to live the consequences of that day’s decisions. That employee doesn’t have to carry the burden of loss, regret, depression, guilt and shame that the adult woman that was that vulnerable 14-year-old child will someday have to come to terms with.
Lila might not have been really pregnant, but those possibly hundreds of young girls the employee admitted to seeing in her office every day really do have a life growing inside of them.

It’s not just this one isolated female employee in Kentucky. This is what happens when an industry (yes, it is an industry) is not regulated like other sensitive industries are run. They can break pesky state laws because they have friends in high places with deep wallets that will come to their legal defense. This is a business to them, a very profitable business with political agendas and a long, dark history.

Thank you Lila and her crew for doing what they do! You can help show people what’s really going on by spreading this video everywhere you are, Facebook, twitter, YouTube, MySpace and your e-mail!
Written at 3:52 PM by Marisa Alvarado.
6 comments
6 Comments:

My name is Rev Robert Wright, Editor for Christian.com, a social network made specifically for Christians, by Christians. We embarked on this endeavor to offer the entire Christian community an outlet to join together and better spread the good word of Christianity. Christian.com has many great features like Christian TV, prayer requests, finding a church, receiving church updates and advice. We have emailed you to collaborate with you and your blog to help spread the good word of Christianity. I look forward to your response regarding this matter. Thanks!

Anonymous said...
We are so excited to present you this press release for the new groundbreaking film: The Life Zone! We feel you this would be compelling content for your audience and would love for you to post the information on your site AND if you’re interested in interviewing the film maker for your blog, please let me know. We can set up an interview asap.

springerassociatespr
1501 Broadway I Suite 506 I NYC I 10036 I (212) 354 4660
Press Contact: Joe Trentacosta/ joe@springerassociatespr.com
For Immediate Release:
From the Mind of Controversial Filmmaker and
Best Selling Novelists
Kenneth DelVechio
THE LIFE ZONE
Will be release on VOD on December 4, 2012
DVD available on December 11, 2012
Controversial filmmaker, bestselling author and former judge, Kenneth DelVecchio’s pro-life thriller, THE LIFE ZONE will be available on December 4, 2012 on VOD (DVD available on December 11, 2012).
THE LIFE ZONE follows three women have been kidnapped from abortion clinics and held for seven months – until they all give birth. Cutting right down the middle of the hotly debated issue, THE LIFE ZONE examines the topic of abortion from both sides but, as The Los Angeles Times reports, The Life Zone is“a psychological thriller bringing an emphatically anti-abortion slant to the hot-button issue.”“The Colbert Report”adds, “Just like all great horror films, Del Vecchio’s movie has a shocking twist.” And Newsweek/The Daily Beast headlined with “The Life Zone has caused an uproar”.
The movie stars Robert Loggia (Academy Award nominee; Scarface, Big), Lindsey Haun (Broken Bridges, True Blood), Martin Kove (The Karate Kid; Rambo), and Blanche Baker (Emmy winner; Sixteen Candles).

Brooke said...
I think all abortion clinics should have camera's as far as the reception desks go like this one. It's crazy how this 14 year old was mislead. I saw some anti abortion mottos that may help in a situation like this, i'll share them here for you: Anti Abortion Pro Life Slogans
Sun Mar 05, 07:13:00 AM CST