Hold those dialing fingers, America! This morning from Examiner.com:

Life Decisions International has taken the lead in making everyone aware that the TV Program called "American Idol" is (and apparently has in the past) aligning itself with pro-abortion groups. They have reported a little know fact that among the groups benefiting this year's "Idol Gives Back" fund-raising campaign are Save the Children and the United Nations Foundation. "Idol Gives Back," which airs tonight, will feature several celebrities who will urge Americans to make a donation.

Save the Children has a working relationship with what it calls "prominent international organizations." Several of these groups are actively pro-abortion, including Better World Fund, Center for Reproductive Rights, Planned Parenthood Federation of America, Population Action International, and the U.S. Committee for UNICEF.

Several divisions of the United Nations have donated funds to Planned Parenthood and the body has wholeheartedly embraced its abortion and population control agenda.

"It is laudable that the people involved with 'American Idol' want to help the poor," said LDI President Douglas R. Scott, Jr. "But it is tragic that they would choose to do so through groups like the Save the Children and the United Nations Foundation. These groups have far too much deadly baggage."

Of course, what many people do not know, because "American Idol" has not chosen to mention it, is that Simon Cowell is the chief executive officer of International Save the Children. This is surely why Save the Children was selected as a recipient charity.

Scott urges that "If you believe the plight of preborn children is as important as the plight of the poor, do not participate in 'Idol Gives Back,'" Scott urged. "We are caring people who want to do our part to help those less fortunate, but we will do so through organizations that do not view the killing of human beings as a 'solution' to poverty and other adult-created problems." 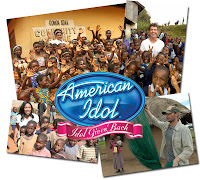 It is worth noting that "American Idol" recently supported a fund-raising campaign by Planned Parenthood of Los Angeles.

(Source: Jake Jones at Examiner.com)
Written at 9:51 AM by Marisa Alvarado.
1 comments
1 Comments:

Campbell said...
This is really an interesting and informative conversation. Nice to find and read. Helpful one for me so bookmark it in my list of bookmarks. Keep sharing and Many thatks for sharing such an information.