Some California college students found Sarah Palin’s supposed speaking contract in a trash bin after “getting a tip” that people would be shredding documents on that day. They found “Watergate”-like information about her flight preferences from Alaska, which surprise, surprise, doesn’t actually tell the whole story.

Forget how you feel about the former Vice Presidential nominee. It pains me to think that this “breaking news” about what some celebrity/political figure’s secret trashcan finding was the scandal mainstream media was working on into the wee hours of the morning.

If they are truly concerned about what kind of secret scandalous things lie beneath dumpster lids, why doesn’t today’s headline read “Discarded baby arms, legs and heads spark investigation?”

Shame on the major media outlets for their blatant lack of perspective on what constitutes trashcan outrage.

Abortion as a visual debate?

Even this rare October 2009 article from The New York Times about the use of graphic images of babies found in dumpsters to show the reality of abortion is written for the “Photography, Video and Visual Journalism” section not for hard news. The Times should be applauded for showing the images, but this article falls short by not following through to the bigger picture. 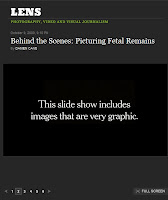 In “Behind the Scenes: Picturing Fetal Remains” by Damien Cave, there is no call to arms, no clamoring for more investigations in other cities in other trash bins in parts of the county. There is no interview with a medical board or country health authority for acknowledgement of violations.

The author isn’t even questioning the fact that bloody baby arms and legs are being unceremoniously thrown into back alley dumpsters like fast food wrappers from someone’s lunch. The author is looking at the visual appeal or lack thereof of the use of these images. There are no follow up articles, no pick ups in other media outlets.

Just skimming through the 304 comments associated with the article, shows how hostile the audience is to the idea of using the images of the aborted torn apart babies. This is the environment we find ourselves in, and it is left to ordinary citizens—you and me—to take to the blogosphere and Youtube (warning: graphic images) to expose these harsh realities. We can’t help that the media is buying their own manure about what deems investigation, but we can make our voices heard by sending emails, making phone calls and talking face to face to the stations and newsrooms telling them about the “breaking news” that is allowed to continue every day all over our country.

Thank you to those out there who do continue these conversations online, in your homes and, most importantly, in your prayers.
Written at 12:13 PM by Marisa Alvarado.
0 comments
0 Comments: