4/16/2010
Contraceptives: A one-sided issue on Wikipedia (and not the side that’s showing the truth)
I was doing contraceptive research yesterday for our updated education page on the CPLC website, and being a product of my generation, I found myself on Wikipedia “the free encyclopedia.” I was really only on there for kicks. I didn’t think I’d find anything of real use, until I saw this (emphasis mine):

"TOTAL ABSTINENCE
Abstinence as a long term method is not 100% effective in preventing pregnancy: not everyone who intends to be abstinent refrains from all sexual activity,[29] and in many populations there is a significant risk of pregnancy from nonconsensual sex.[30] As a public health measure, it is estimated that the protection provided by abstinence may be similar to that of condoms.[31] Some authorities recommend that those using abstinence as a primary method have backup method(s) available (such as condoms or emergency contraceptive pills).[32]"

Let’s review. Assume “nonconsensual sex” = rape or incest. Are we to believe that according to this entry, abstinence is not 100 percent effective to prevent pregnancy because of the .005 percent chance that you’ll get raped or be a victim of incest?

Are we also to believe that “as a public health measure” you run just as much chance getting pregnant as an abstinent person by rape or incest than as a sexually active person using a condom?

And that “some authorities” suggest that abstinent people stock up on condoms and emergency birth control pills just in case?

This entry should have been filed under “Are you kidding me?”

It’s clear from this analysis of the practice of abstinence and the first two paragraphs of history of birth control that sing high praises of Planned Parenthood founder Margaret Sanger that the person who wrote and cited in this entry is pro-contraceptive.

What they’re not telling you
It’s what I didn’t find that agonized me. There are ZERO mentions of the documented harmful side effects and deaths caused by contraceptive use.

Regardless of the source, it’s irresponsible of Wikipedia to allow the entry creator to promote so many forms of “birth control” without promoting the statistics of how many condoms fail to prevent the spread of HIV in the US and all over the world, the harmful side effects, and even deaths as a result of using these methods. 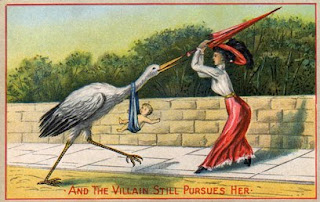 Contraceptive truth
“Contraceptives” is the general term used since 1891 to describe “the deliberate prevention of conception or impregnation by any of various drugs, techniques, or devices.” “Birth control” is a term used in today’s society. The problem is that these methods don’t “control” birth. They exist to potentially facilitate the death of an unborn child.

But that doesn’t sell as well in a glossy magazine ad.

It was the third entry that came up after I typed in Birth control in the Google search engine. Planned Parenthood was the first entry. Not much of a diverse amount of information there. Just a warning. Be weary of information when you read things like “reproductive rights,” “family planning,” or “equal preventive access.”

We’re in the process of updating our Contraceptives page to look a bit more like our new Abortion page, but until then, here are some good sources for real information about contraceptives.

I’m also working on trying to edit the actual Birth Control Wikipedia page, but I’m having trouble with the program. For those of you who are more technically inclined than me, please feel free to give the editing button on Wikipedia at try. Let me know how it goes.
Written at 10:27 AM by Marisa Alvarado.
2 comments
2 Comments:

James Heaney said...
Before editing the page directly, you will definitely want to read and comment on the article's Talk page, giving a general overview of the changes you intend to make to the page, an explanation for why those changes will improve the article, and, if these issues have been dealt with before, you'll have to introduce fresh information (or new sources) to show why the other editors should reconsider the established consensus. Having done that, wait a few days, accept comments from other editors, hone your proposals, and then make your edits. Remember: wikipedia articles (especially controversial ones) are dominated by *consensus positions*, so all your commentary and edits should be directed towards building a consensus. Use strong, unimpeachable, uncontroversial sources with an accepted track record (i.e. peer-reviewed studies), or, better still, find sources from the other side, and -- above all -- be NICE to your fellow editors. Assume that their bad article writing was done in good faith, be generous in discussing the changes you'd like to make, and listen to and honestly address their concerns about your proposals.

"Editing" a WP article is easy; just type and press Submit. But making edits that won't be reverted in twenty-four hours? That means going through the process of talking to other editors and building a consensus.

Just some advice from a WP old-timer. I was on WikiProject:Abortion for several months when it was still active, and fought some of these same fights over "Emergency Contraception" and Abortion itself. It is thanks to consensus-building, strong argumentation, and some good fellow editors that we were able to keep the phrase "resulting in or caused by the fetus's death" in the first sentence of the abortion article -- the pro-deathniks, of course, wanted that discomfiting phrase removed.
Sun Apr 18, 01:52:00 PM CDT