3/03/2010
Hope in the darkness: 151 babies saved in 15 days
In 15 days, 151 lives have already been sparred from the death of abortion! God works in so many amazing ways. If you don’t already get the updates from David Bereit, I recommend you sign up for the latest life-saving stories from across America on the 40 Days for Life national blog.

Here are some of the holy spirit-inspired highlights. 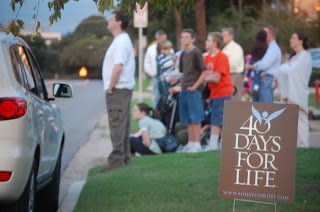 “A young woman walked up to the 40 Days for Life vigil outside an abortion center in Austin, Texas recently. She signed up to join the others in prayer ... and then immediately sat down on the sidewalk and started to cry.

One of the volunteers stopped praying for a moment to approach the young woman, whom she had never met before, and asked her if she needed a hug. This volunteer assumed that the thought of what was going on inside the abortion facility had simply overcome this woman and brought her to tears.

But that wasn't the case. To her surprise, she found out this young woman was crying for another reason. 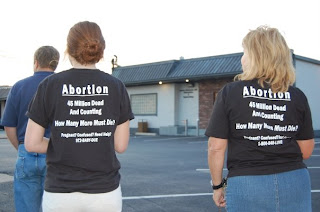 “Two volunteers stood in the rain and prayed at a 40 Days for Life vigil last week as a young man drove up, got out of his car with the engine still running, and walked over to talk to them

‘I just wanted to thank you for being here,’ he said.
‘I know you know what kind of a place this is,’ he said, pointing towards the abortion facility. ‘Can I tell you a story about it?’

The prayer volunteers nodded yes, and the young man began to pour out his heart.

He said a couple of weeks ago, his wife was not at home and he had no idea where she was -- until he got a phone call from the hospital. ‘My wife had been admitted because she was having seizures,’ he said.

At the hospital, he found out his wife was pregnant. It would be a struggle with two young children already, he said, but they'd work it out.

As he spent more time at the hospital, it began to dawn on this young man that no one was telling him the whole truth. He realized something was seriously amiss when his wife told him she'd left her car at an abortion facility. He thinks she went there for a chemical abortion -- the abortion pill. She began to have seizures and was taken to the hospital.

His wife insisted she was still pregnant, but he simply didn't know for sure.

‘I haven't stopped crying in over two weeks,’ he said. ‘What kind of place is this that would do this to a married woman without telling her husband, the father of the baby?’"
Read more

Anonymous said...
"What kind of place is this that would do this to a married woman without telling her husband, the father of the baby?"

.... the kind of place that thinks she still has the right to control her own body whether or not she's married?

Ask HER why SHE didn't tell you; that's fair. But if you're saying doctor's offices need to be calling up people's spouses and getting their PERMISSION for medical treatment? No, honey. She's your wife, not your property.
Tue Mar 08, 10:26:00 PM CST