2/05/2010
In his own words: Tim Tebow on ‘Celebrating Family, Celebrating Life’
Via LifeNews.com 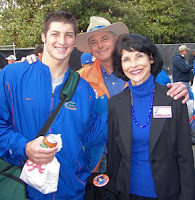 Mobile, AL (LifeNews.com) -- College football superstar Tim Tebow defended a Super Bowl commercial Focus on the Family has filmed that is generating national attention. Tebow confirmed the commercial will focus on pro-life values and tell the story of how his mother decided against an abortion.

After the Senior Bowl practice on Wednesday, Tebow admitted he was surprised at the growing attention the Super Bowl commercial is receiving.

“I definitely didn't think it would have this much hype,” Tebow said, according to an Orlando Sentinel report. “It’s something I believe in and I'll stand up for.”

Tebow would not give any spoilers about the content of the ad -- which Focus on the Family has confirmed will run with the message "Celebrating Family, Celebrating Life" -- but confirmed it would share his mother's story.

“I don't think it’s anything that’s negative or anything like that,” Tebow said, according to the newspaper. “It’s a good time and place. There are a lot of people watching. It’s a great opportunity to show something very happy and a special story and my mom fighting for me. There are a lot of great things in that.”
Written at 3:51 PM by Marisa Alvarado.
0 comments
0 Comments: