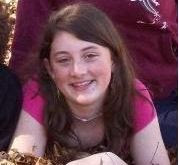 Mary R. is a very special young lady from a very special family. She has four younger sisters, and amazing parents that exemplify what it means to be Catholic spouses and parents in this day and age. So it's not surprising that their eldest daughter, age fourteen, is already defending the teachings of the Catholic church with a zeal that most adults lack. Recently, for a class project Mary had to defend a controversial teaching of the Catholic church. She chose abortion. What follows is her project. She received 100% on the project, but I think I would have given it 110%.

Abortion
· The topic I chose to defend is about Abortion. The Catholic Church teaches that abortion is morally wrong. (Even though it is legal)
· Abortion is legal because of the decision Roe versus Wade made on January 22, 1973. The law made abortion legal with the intent of reevaluating the decision based on new technology and scientific advancements. We now know that life begins at conception (and not when the mother could feel her baby move as thought in 1973). Ultrasound imaging has advanced our ability to see the fetus (a developing human) during stages in development in the mother’s womb.
· The Catholic Church believes that the fetus is not just another part of a women’s body like many pro choice people believe. A body part is defined by the common genetic code it shares with the rest of the body. The preborn’s genetic code differs from his/her mother’s. Ex some preborn children are male, while their moms are female. Each child has his/her own unique genetic identity, gender, heartbeat, brain waves, eyes, hands, feet, etc.
· The fetus is NOT a potential human. A fetus is a person at a particular stage of development much like a toddler or an adolescent. The fact is that something that is non human doesn’t become human by getting older and bigger, it is human even before it starts developing.
· The early stage of human life is as meaningful as any other stage. If we listened to pro abortionists who based human value on size and intelligence then we would also have to dehumanize other members of society such as mentally handicapped people.
· Since human life is valuable every human is wanted. A pregnancy may be unwanted but there is no such thing as an unwanted child. Many people are waiting to adopt babies. If we exclude all human beings who we believe are unwanted then any segment of society is at risk: AIDS victims, the elderly, etc.
· Everyone has free will, the ability to choose and make their own decisions. God is prochoice but in the sense that he wants us to make our own choice. He wants us to choose the pro life cause for many reasons. Jesus gave up his life for our sins so that we could live. God created each of us in his own image and likeness. We are each special and unique. We are each creations of God. The bible teaches that children are a gift from God. God knows each child from his/her first moment in the womb. According to Jeremiah 1:5 “Before I formed you in the womb I knew you. Before you were born I dedicated you, a prophet to the nations I appointed you.”
· Do you think God is pleased that his children are being brutally killed during an abortion? I definitely do not think he is pleased. I think in response God sends holy people that support the prolife cause. I know a friend personally who last summer started getting involved in prolife work which is where she met her husband. In February (2 consecutive Saturday’s) they found 23 aborted babies improperly disposed of in a dumpster behind an abortion clinic in Michigan. They also found patient records in the dumpster. The Prolife Committee had a funeral 2 weekends ago for the 23 aborted babies.
· Abortion is morally wrong because you are killing another person. It is against the 5th commandment “thou shall not kill”.
· Abortion is taking an innocent life. Exodus 20:13 says “you shall not kill” and The Catechism of the Catholic Church 2270 states “Human life must be respected and protected absolutely from the moment of conception. From the first moment of his existence, a human being must be recognized as having the right of a person- among which is the inviolable right of every innocent being to life.”
· Every abortion stops a beating heart and terminates measurable brain waves.
· Americans kill nearly 1 million preborn babies a year through abortion. That is more than 2,700 a day or about one every 30 seconds. Hitler killed 6 million Jews but since 1973 Americans have exterminated more than 44 million preborn babies.
· Why haven’t abortions stopped?
-The Abortion industry makes a lot of money. $$ For abortion.
In conclusion…
· Any circumstances do not justify killing an innocent human being.
· In an abortion the rights of the baby are being denied.
Choose Pro Life!!
Written at 10:56 AM by Milissa.
0 comments
0 Comments: